Kindle versions of Havok are now available on Amazon. This is the UK and this is the US version.


I am trying to get some free promotions arranged.
Rookh Kshatriya at 17:48 35 comments:

Red Socks and Door Knobs: Confirmation of the Anglobitch Thesis

A British institution is daring to acknowledge (and respond to) human sexual needs:

A British nursing home is on the defensive after local authorities learned it may have regularly hired prostitutes for its residents. According to The Times of London, Chaseley nursing home in Eastbourne, England, is accused of regularly scheduling visits with sex workers, who meet residents in a special room and put a "special red sock" on the door for privacy. Caregivers are said to check on the rooms every fifteen minutes, the paper reported.

Manager Sue Wyatt told British tabloid The Sun that a "third party consultant" handled the procurement of the sex workers, who helped residents with their "needs."

Helena Barrow, whom The Sun says is a Chaseley ex-manager, clarified further: Professionals offer a service that is both therapeutic to residents "frustrated" by "primeval needs" and helpful for the staff, she told The Sun.

“If you have a resident who is groping staff, one way of resolving that problem is to get a sex worker in who is trained to deal with that situation," Barrow said. "The fact is sex workers are allowed by law to sexually enable people but care workers are not."

The Inquisitr reports that the East Sussex County Council is nevertheless looking into the practice to make sure residents are not being harmed.

The council released a statement saying, “We will examine our concerns through the Pan-Sussex Multi-Agency Policy and Procedures for Safeguarding Adults at risk. This has the potential to place vulnerable East Sussex residents at risk of exploitation and abuse.”

Fantastic. A logical, humane response to the problem of sexual disenfranchisement. If we consider the ‘mainstream’ English media’s response to this progressive solution, however, puritanical hysteria looms large. In a Daily Telegraph Blog article entitled 'Prostitutes for Disabled People: Does anyone see a moral problem here?' Jake Wallis Simons presents the puritan case:


Here’s the long and short of it. A care home is accused of hiring prostitutes to have sex with its disabled patients. Does anybody see a moral problem here?

The establishment in question is Chaseley in East Sussex, a facility that cares for adults disabled by spinal injury or illness. Former manager Helen Barrow says that the disabled feel “frustrated by a primeval need they cannot fulfil” and that the provision of sex constitutes a “holistic level of care”. The home, we are told, uses a “special consultant” to contact the sex workers and places a red sock on the door handle so that the “special visits” are not disturbed.

It would be a grave mistake to pass judgment upon people with serious disabilities, and it is certainly not my intention to do so. But setting aside the legality of the issue, the fact that Chaseley can talk so glibly about this "service" speaks volumes about the sexualisation of our society. I’m no prude, but in this case the place of sex within a broader emotional relationship seems not to even be considered. They are simply fulfilling a biological urge in their patients, and that is all there is to it.

The day has come when we need to be reminded that sex is an exchange of the spirit, as well as the body. It must also be made clear that there are many things that cannot be bought. This is not to promote a return to Victorian puritanism. But it strikes me that there is a dark side to the liberalisation of the stuffy mores of the past, and it is masquerading as open-mindedness today.

It will be noted that this response lacks even rudimentary logic. Repression is assumed to be a superior psycho-sexual condition and sex itself a quasi-mystical phenomena. Indeed, the author's tone is almost Tantric. Worse, we see total, callous indifference to the walking death of male sexual disenfranchisement.  One wonders if the socially integrated, upper-middle class individual writing this drivel would be quite so sang-froid if he himself was facing a lifetime of sexual deprivation.

Truly, there is a potent strain of misandry in all Anglo-American conservatism. The puritanical meme in Anglo-Saxon civilization has, at its root, a callous indifference to male sexual needs. Perhaps this derives from the abrasive and atypical Anglo-American class system – elite males often impose a puritanical agenda on low-status males. Of course, this is to legitimate sexual inequality of opportunity and reward.  Thus, we see the folly of conservative MRAs: they have internalized and accepted the mechanics of their own oppression. In sum, the systematic denial of male sexual needs oppresses men and exalts women, whose ‘value’ always rises in climates of erotic scarcity.

There is another important point to consider. Why are Anglo conservatives so ‘illogical’? Why do their core opinions lack elementary rationale? Perhaps the answer lies deep in Anglo intellectual life.  Nietzsche noted that English intellectuals retained a reflexive attachment to Christian morality while rejecting literal belief in God. He divined a certain folly in this: how could one accept a theological moral code while rejecting its divine sanction? After all, contemporary English Christianity – a kind of puritanical socialism - has no more spiritual gravitas than Dyak head-hunting; yet in our post-Darwinian age of money, sex and power, Conservatives still assume its immutable value.

And so the same old repression is reflexively trotted out as a universal panacea for all life’s ills without evidence or justification. One is reminded of a horse uselessly pawing the earth: for conservatives are creatures of useless reflex, not constructive thought. 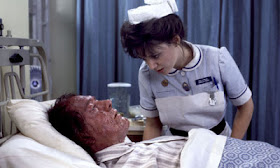