In the history of a movement, there comes a time when the originator (if he has taught well) notices that his admirers are developing his core concept in novel and exciting ways, often displaying greater profundity and economy of style than he himself could ever contrive. The Chinese have a wonderful saying to describe this process: 'Standing on the Shoulders of the Master'. The following post on a celebrated MRA blog by one Monsieur Chauvin is a perfect example of this. Study it well, for this is the finest exposition of the Anglobitch Thesis ever yet created:

All White Anglo-Saxon Protestant Females Are Cunts And Garbage: An Introduction To The Anglo-Bitch Thesis

What is the Anglo-Bitch Thesis? Within the field of men’s studies and the male rights movement in general, a new point of view has arisen, which sees Anglo-Saxon feminism as the driving force behind the institutionalized misandrist discrimination currently being directed towards males, especially males of Anglo-Saxon race and Protestant faith. Thus, the feminism which arose within the Anglosphere during the 1960s and 70s, as distinct from the collaborative partnership feminism of Western Europe, has never been about seeking the emancipation of the human female from the shackles of patriarchal bondage. This sense of entitlement ( the so-called princess syndrome) that is diligently inculcated into the Protestant Anglo-Saxon female from the earliest youth, is directly descended from the Calvinist work ethic of the first English settlers in the New World. From the perspective of Calvinist belief and practice, women were placed on pedestals and held to a separate code of conduct and personal morality that is beyond individual scrutiny or criticism. Hence, it is because of the puritanical basis of Anglo-Saxon culture that women are granted an automatic sense of entitlement, which comes from the female being transformed into a supplier of sex through the market forces of industrial capitalism, where sex itself is seen as a scarce commodity that must be rigidly controlled so as to maintain the privileged position of the human female within all heterosexual transactions.

In other words, modern Anglo-Saxon feminism, combined with the Calvinist belief in the natural purity and chastity of the female (according to the Protestant scholastics of the late Reformation period, the human female was seen as a creature who was void of sensual passion) has granted the female a substantial number of rights, even more rights than the average male. However, what the modern Anglo-Saxon woman has been granted is a series of rights without their corresponding responsibilities, further reinforcing the automatic sense of entitlement and privilege that the overwhelming majority of women have been born and bred into since the dawn of human biological evolution. This exaltation of the Anglo-Bitch to the upper echelons of a once male-dominated status hierarchy has unleashed a wave of institutionalized discrimination against males that is unprecedented in the history of mankind; never before have men and boys been so oppressed and vilified by a medieval Christian-Teutonic code of chivalry which has skilfully been concealed under the gaudy trappings of modern ideological feminism.

Another major contention of the Anglo-Bitch Thesis is that the nations of the Anglosphere (USA, Canada, UK, Australia, New Zealand etc.) are matriarchies dominated by women and effeminate, androgenized bureaucrats. In the matriarchal tyrannies of the Anglo-Saxon world, the woman leads a life of privilege and luxury, whereas the male is confined to a life of abuse and degradation. Women are so deeply entrenched within the upper socio-economic and political strata of the Anglosphere, that to dislodge them from their positions of comfort and unprecedented freedom would require a considerable amount of coercion in the form of brute force. The problem with modern ideological feminism is that women have been allowed to retain the privileges they had before the advent of female suffrage and emancipation. For example, women wish to join traditional bastions of male patriarchal dominance, such as the military or heavy industry, while refusing to let men become fully integrated within conventional feminine organizations. Even within the judicial system, women are still given preferential treatment; they are seldom prosecuted for criminal offenses and are almost always granted favourable settlements during divorce and child custody proceedings.

Eventually, the Protestant Anglo-Saxon female will have to choose between having unearned privileges on the one hand and having rights with their corresponding responsibilities on the other. However, this is unlikely to occur given the prevalence of Teutonico-Christian chivalry, disguised as modern feminism, throughout the Anglosphere and other Western Industrial societies.

The final solution to the central problem of the Anglo-Bitch Thesis is by having a significant majority of men refuse to marry (aka the marriage strike). When financially solvent, middle-class males refuse to participate economically and politically within the institutions of Western society, only then will the imaginary colossus known as the Protestant Anglo-Bitch be finally brought to her knees.

The male refusal to participate in the affairs of the Western Anglo-Saxon Protestant matriarchy of today will cripple feminism once and for all. 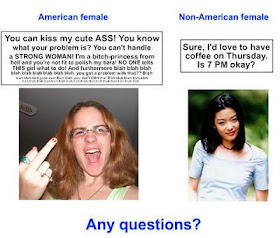