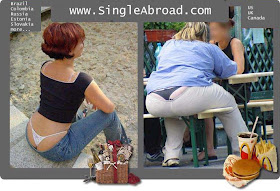 At last we get to the real vital statistics. Anglo-American women are fat - to say it any other way is trite euphemism:

The authoritative Eurostat yearbook places Britain at the top of a chart of obesity of the EU’s 27 member countries. Breaking the data down by gender shows that British women are the fattest in Europe, with almost a quarter at least two to three stone over their ideal weight. German women have an obesity rate of 21.7 per cent and Maltese women 21.2 per cent. The thinnest women are in Italy, where fewer than 8 per cent are obese (The Obesity Timebomb, F MacRae and L Ballinger, Daily Mail, Wednesday, February 21, 2007).

Italy, for long the butt of Anglo-Saxon jokes about the girth of its women clearly confounds the mockers. As ever, the English perceive themselves to be top of the tree. Indeed they are – but in all the wrong lists.

When we look at the European figures for female obesity, the Anglobitch is clearly a long way ahead - in fact, nobody can get by her:

* Figures for England only

Remember also that this chart includes another 17 countries, all of which have less obese women than England. The Nordic countries, France, Spain and many others all contain fewer fat women (and, by definition, more attractive women) than the two major Anglo-American countries. The evidence is plain for all to see: despite all the maudlin Anglo blubbering about ‘English Roses’ and ‘Maids of Golden Hair’ it is obvious that in physical terms Anglo-American women are less attractive than foreign women – unless one accepts that ‘fat is beautiful’, of course. This is the cornerstone evidence that sustains the Anglobitch thesis. Psychological analysis is very good in its way (and we offer plenty of it) but ultimately, hard figures always present an irrefutable case. Nor is the problem an exclusively English one:

Adult obesity rates have nearly quadrupled over the last 25 years, making Britain the second fattest nation in the developed world, trailing behind only America. (Mail, 2007) 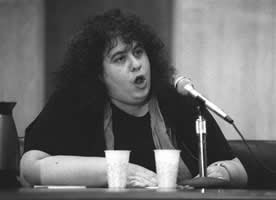 Surprise, surprise! Of course, America – military, media and economic capital of the Anglosphere - would have to smash all weight records – and scales. What reason do the experts give for this smorgasbord of excess female flesh?

Dr Colin Waine, of the National obesity Forum, said: ‘The health risks are tremendous but the statistics are still going up exponentially. We need the Government to work with food manufacturers to produce a diet which is nutritious but less dense in sugar, salt and fat.’ (Mail, 2007)

But if they did, would anyone eat it? For the real cause of Anglo-American female obesity is in fact the puritanical ethos that pervades the Anglosphere. Because women possess sex in a repressed culture, they are under no obligation to improve their appearance: simply being female is impressive enough. Anglo women continually regale themselves with fairy tales that men secretly adore the ‘big and beautiful’ (i.e. fat) build. Essentially they are used to attracting men: because, until recently, men had no alternatives to choose from. Now, with lithe, tawny models available from Hungary to Brazil, that arrogant assumption no longer holds water. Instead of grasping the nettle, accepting the new romantic marketplace and losing the pounds in order to compete with the lissom lovelies gracing the dating sites, the Anglobitch retreats into comfort eating, bulimia and neurosis.
Rookh Kshatriya at 09:59