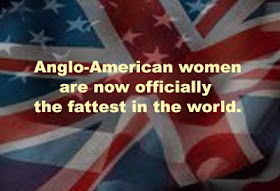 What are the broad findings of the preceding debate? How can it redefine the Anglobitch Thesis?

To sum up, Turbo capitalism and feminism have combined with certain traditional Anglo-Saxon values to produce an increasingly dysfunctional and unstable Anglosphere. The traditional Anglo features – repression, class distinction, subculturalism, chivalry, male exclusion – only became lethal when Anglo feminism and Turbo-capitalism arose (like the different chemicals comprising a lethal injection). The following list tries to unravel and expand these ramifications:

• Anglo cult of novelty and progress, eroding traditional wisdom and institutions for sociopathic ‘Me-Ism’ (see Coupland’s Generation X)
• Anglo cult of objectivity (pragmatism in the US, empiricism in the UK) leading to lack of self-awareness among the Anglo-American elites, an abridged sense of the ‘other’ and little will or capacity for remedial action
• The Internet – more damaging to Angloculture than most others due to limited social bonds, subcultural values and lack of common experience
• Imbalance of Anglo culture in favour of Reason (William Blake’s Urizen), to the neglect of emotional, spiritual and social factors
• Anglo puritanism and repression – creates sense of entitlement among Anglo-American women and adverserial gender-relations
• Being more recent than, say, Scandinavian feminism, Anglo feminism is still relatively undeveloped so Anglo women have acquired rights while retaining privileges
• Internationalist, internet-led ‘turbo-capitalism’ that weakens participative democracy, promotes unrealistic ‘celebrity standards’, creates a chav underclass, widens socio-economic divides and promotes mass immigration to do Gamma jobs indigents cannot afford to take
• The Anglo-Saxon class system, that values birth class more than secondary social factors, links class to gender relations and promotes social subcultures (Bourdieu’s ‘class fractions’)
• Anglo social inequality promotes alienation and self-exclusion among Beta and Gamma males, leading to higher crime rates, more risk-taking behaviour (the gangsta cult) and violence towards women.

One of the most interesting observations is that when men have no genetic stake in a given society (a mate and children, or reasonable hope of them) they simply have no reason to be pleasant (let alone chivalrous) towards women. I found a good example of this on my own YouTube channel; viewers had limited interest in my conceptual Anglobitch shows, great interest in a white girl being beaten to a pulp by a Hispanic (80% of the viewers prefer the beatdown). I doubt this would be the case even twenty years ago; now, there are far more single men viewing women through disinterested (or even hostile) eyes. Where this will end, I cannot guess.

Although the Anglosphere is beset by a wide variety of problems - social closure, economic 'Brazilification', political corruption and widespread alienation, it is obvious that most of these problems can be traced to worsening gender relations. For example, the burgeoning 'chav'/guido underclass is the product of single-mother led, Welfare-dependent post-feminist families. In addition, underclass males without prospects or resources will inevitably resort to crime and violence in order to attract a mate, since no other options are available to them. Male alienation, rising crime rates, dysgenic breeding habits and declining national IQs can all be traced to the rise of Anglobitch feminism and non-regulation of female sexual instincts. As Robert Wright of Harvard opines, a society with high percentages of single men will soon cease to be viable. Anglo-American feminists are single-handedly responsible for this far-reaching social crisis - no other culprit fits the bill so perfectly.

I, Rookh Kshatriya, have always assumed that the Anglosphere could be saved if Anglo-American feminism could be caged and its dysfunctional, atavistic impact reversed. I am now beginning to question that – perhaps the Anglosphere is doomed. Too many essential Anglo-American social mechanisms seem to be broken beyond repair.
Rookh Kshatriya at 17:34