Only in England: Elite Anglobitch Murderess escapes from Open Prison 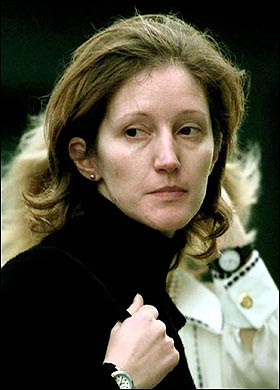 Murder someone with a cricket bat, get your sentence reduced for no reason, fake a drugs overdose to get into a cushy 'open prison' that resembles a stately home, escape over the wall - and no one bats an eyelid! Why couldn't I have been born an Anglobitch? Hey, only in England...

Former Royal aide Jane Andrews escaped from prison just four days after parole chiefs caved in to her demands to switch to an open jail. Murderer Andrews, 40 - the Duchess of York's ex-pal and dresser - is believed to have "bunked over a wall" after a therapy session.

Panic-stricken bosses at HMP East Sutton Park in Maidstone, Kent, locked down the prison and called in support from police search teams and helicopters. But they were later forced to admit she could have vanished at any point during an EIGHT-HOUR window. 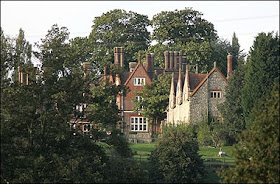 Andrews, who escaped on Sunday, was still at large last night despite a huge search.

Andrews - who was moved to East Sutton Park after convincing a parole board of her "remorse" - had just come off suicide watch. She swallowed a handful of paracetamol tablets last Wednesday three hours after arriving at her new jail and had to be rushed to hospital.

A prison insider said: "Jane Andrews has only just arrived and she's already managed to escape. Maybe that tells you something about the state of prison security. She is easily the most high-profile prisoner here and so she should have been monitored. It's embarrassing that no one noticed she was missing until nearly 9pm, and she couldn't be accounted for after around 1pm."

Prison insiders said last night the alarm was raised over Andrews being missing at 8.45pm on Sunday, when a roll-call showed she was not in her cell. After a full search of the grounds, she was deemed a fugitive and the police were called. A helicopter arrived at about 11.45pm.

The former flunky was jailed for life for the murder of her lover Tom Cressman, 39, in 2000. She clubbed him unconscious with a cricket bat and then stabbed him to death with a kitchen knife because he refused to marry her. Victim Tom's brother Rick, 58, said last night: "She has moved to an open prison and what has she done? It was too early to be doing it. I suspect she will try and leave the country."

Meanwhile Tom's mother told today of how police have increased security around her house after the killer escaped. Barbara Cressman, 81, said she thought that "a life sentence should be for life" and that Andrews should never have been moved to a low security prison to begin with.

She said: "I think it's public knowledge how I feel about Jane Andrews. She should never have been moved to a low risk prison after the horrific crimes she committed. It was especially surprising to hear she's escaped after she tried to kill herself during the week by taking an overdose. I found out from my victim liaison officer - there is increased security around me but I feel quite safe. She shouldn't even have the chance for parole, she deserves to serve a proper life sentence. Look at how many people are released too soon. Her 12 years are not enough to pay for what she did."

Andrews was eligible for release in 2012, despite being jailed for life in 2001. She was sentenced to a minimum of 15 years, which was reduced to 12.

Source: The Sun
Rookh Kshatriya at 22:21