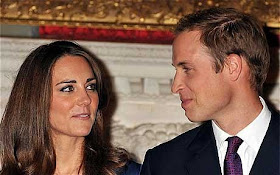 With the Anglosphere's interest in all things British and Royal, a great deal can be gleaned from the recent announcement of the wedding between Prince William and Kate Middleton. The press are swooning over Kate's wedding dress, not just in Britain but across the Anglosphere. It were as if we lived in a culture where marriage remained a central feature of British people's lives, when if fact Marriage rates in 2010 are at their lowest since records began:

The number of people getting married has fallen to its lowest level since records began in 1862. For the first time ever fewer than 2 in 100 women, over the age of 16, got married in a single year. In 2008 the marriage rate for women fell from 2 per cent to 1.96 per cent, less than half the rate 25 years ago.

The rate for men has shown a similar decline, according to the annual figures published by the Office for National Statistics. The figures highlight how marriage has substantially fallen out of favour. From a peak in 1940, when 426,1000 young couples – spurred on by the urgency of World War II – married for the first time, just 147,130 marriages in 2008 were where both partners were getting wed for the first time.

In total, just 228,204 marriages took place during 2008 in England and Wales. The escalating cost of weddings, and the failure of the Government to support the institution of marriage were among the factors blamed. Though, long-term changes in society, especially the increase in the number of women working and their desire to get married later in life, are also key factors.

Many expressed sadness at the statistics.

Dave Percival, a campaigner for marriage, said: "Living together and marriage are increasingly seen as the same by the public, yet the outcomes are radically different. Two thirds of all the first marriages in 2008 can be expected to last a lifetime. Less than 10 per cent of cohabiting relationships last even to their tenth anniversary."

So, given the fact that we now live in a post-Marriage era (as American Game experts aver), why all the hysteria about this Royal Marriage? I would argue that we are seeing puritanical Anglo-Saxon memes at work. Like the ever-popular Disney franchise in the United States, the British Royal Family is an archaic residue of core Anglo values: repression, puritanism, misandry and feminism (in no particular order). Consequently, it reflexively exalts events and persons who advertise this agenda. Moreover, the popular appeal of such saccharine fairy tales to the Anglo-American masses shows that, in attitudes at least, puritanism is alive and well across the Anglophone world. If it were not, why does the pan-Anglosphere preoccupation with 'white weddings', 'princesses' and 'happy ever after' remain so perennially popular?

Moreover, the marriage gives us a deeper understanding of Anglo feminism. Kate Middleton is a fairly average girl: average looks, average intellect and distinctly average accomplishments. When swept up in the Royal Marriage tornado, however, she suddenly becomes an exalted goddess striding down the aisle of Westminster Abbey in a (faux) virginal white gown, set high above all others. Even Prince William becomes a mere dramatic prop in her all-pervasive psycho-sexual drama - and he is the heir to the throne of England! And so we see who Anglo feminism strives to stifle male sexual self-expression with all the forces at its disposal, why it vilifies male virility at every turn and why it does not differ one jot from Victorian puritanism: because those agendas exalt women and diminish men. It really is that simple. And this is the fountainhead of all that oppresses men in the contemporary Anglosphere. While draconian punishments are meted out to males for the least infraction (or no infraction, in the case of divorced fathers) women are essentially above the law - guiltless goddesses on pedestals, one and all.

But really, given the Royals' abysmal record at long-term relationships (very much in line with the rest of the British population), the likelihood of Kate and William becoming a long-term symbol of wedded bliss are slight indeed. Understandably touchy about this very fact, the British Establishment (composed of women, White Knights and Gay White Knights, from all I can gather) has recently suspended an Anglican Bishop for daring to even mention this possibility:

A leading bishop has been criticised after publicly denouncing Prince William’s engagement to Kate Middleton and predicting that their marriage will only last for seven years.

Canon Peter Bruinvels, a Synod member and former Tory MP, said: “This is deeply disappointing and disrespectful. The Bishop should be reminded that we are an estab­lished Church in which the Monarch plays an integral role.”

The Bishop’s immediate superior, the Bishop of London, the Rt Rev Richard Chartres, is a close friend of the Prince of Wales and sources have suggested that he may be asked to conduct the wedding service.

But Lambeth Palace played down the furore, insisting that the bishop was “entitled to his views”.

Bishop Broadbent made his comments about the engagement on Facebook, shortly after it had been announced last Tuesday.

He wrote: “Need to work out what date in the spring or ­summer I should be booking my republican day trip to France.”

He went on to say: “I think we need a party in Calais for all good republicans who can't stand the nauseating tosh that surrounds this event.

“I managed to avoid the last disaster in slow motion between Big Ears (Prince Charles) and the Porcelain Doll (Lady Diana), and hope to avoid this one too.”

He said the wedding should belong to the family, as opposed to becoming "national flim-flam” paid for by tax payers. And he criticised the media for descending into “fawning deferential nonsense”.

“I wish them well, but their nuptials are nothing to do with me,” he wrote. “Leave them to get married somewhere out of the limelight and leave them alone.”

He later added: “I give the marriage seven years.”

Beneath the predictable Anglo-Saxon hysteria and 'fawning deferential nonsense', of course, lies a very serious ideological agenda. The good Bishop has dared to challenge the inane puritanical meme that still exerts such a pernicious influence over the Anglosphere and for that, he has to be publicly pilloried.

In our view, seven years is rather too long for this marriage; three is a far more accurate assessment. This is largely because Anglo-Saxon repression brings unrealistic expectations to marriage, which is paradoxically why the institution is crumbling across the Anglosphere. It is fanciful and cruel to expect still-virile males to rely on past-prime wives as their sole sexual partners. More rational, less puritanical peoples (the Latins and Japanese, for example) allow husbands sexual escapades beyond matrimony with prostitutes and other women of 'easy virtue'. This erotic pragmatism actually maintains the institution of Marriage by introducing a safety-valve to dissipate accreted sexual tensions. By contrast, Anglo Marriages crumble under the weight of unrealistic, Disneyfied expectations. And then, of course, there is the thorny issue of Anglo men refusing to marry at all for fear of post-divorce penury at the hands of feminist judges...

So much for puritanism.
Rookh Kshatriya at 11:43