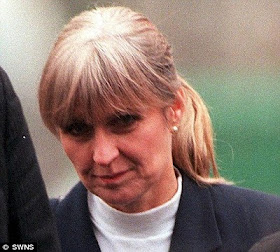 We are sometimes told that the Anglosphere is not a matriarchy because a tiny minority of males control all the positions of power in the media, politics and business. This cannot be conceded, as the following case makes plain. In a pragmatic sense, women across the Anglosphere enjoy enormous privileges before the law, in employment and in a plethora of other areas. Consider this: had a man conspired to kill his wife, would he have received such a perfunctory sentence and then been given a position working with children?

A social worker who hired a hitman to kill her ex-husband was given a job with her local councils' child protection unit, it has emerged.

Bath and North East Somerset Council was forced to apologise after it hired Lynda Barnes knowing that she had previously been found guilty of conspiracy to murder. Barnes, 55, was convicted of the charge after offering a contract killer £10,000 to 'take out' her former husband Rodney.

She was given a two-year suspended prison sentence in 1995 and was sacked from her job at Avon County Council. Barnes was later given the job with Bath and Somerset Council, despite admitting to the conviction during the application process.

But her past emerged during a child protection case at Bath County Court last June where she allegedly lied on oath and asked another social worker to lie to the court. The judge ordered an investigation and published a damning report into her 'appalling' actions.

Barnes, from Nailsea, north Somerset, has now resigned from her post where she held a senior job managing 20 social workers. The council has reviewed all cases she handled during her employment. A council spokesman said it has apologised to the families involved with Lynda Barnes and has also offered an apology to the court.

'Lynda Barnes lied to the court under oath. She also asked one of our other social workers to do the same,' the spokesman said.

Barnes was arrested in July 1993 after arranging a meeting with a hitman 'Peter' - who turned out to be an undercover policeman. She met him in layby on the M4 and offered him £10,000 to murder her (allegedly) abusive former husband Rodney, then 33, with whom she had split two years previously. Barnes planned to sell his unique turbo Fireblade motorcycle to finance the hit, the trial at Bristol Crown Court heard.

She initially denied conspiracy to murder but dramatically halted the trial on the second day to change her plea to guilty. On March 24 1995 Judge Peter Fallon said he was imposing a lenient two year suspended sentence as the case was 'the most unique set of circumstances' he had ever seen.

A co-conspirator, who helped set up a meeting with the undercover policeman, received a 38-month sentence.

At the time of her conviction Barnes was a social worker in the Child Care Department of Avon County Council. She tried to take them to a tribunal, claiming unfair dismissal, but the case was thrown out. In 1996 Avon County Council was scrapped and the area it covered was split between a number of local authorities, including Bath and North East Somerset Council.

Judge Paul Barclay said he was 'appalled' and carried out his own investigation into Barnes' past, which exposed her criminal past.

It emerged that she had disclosed her conviction during the application process.

But she gave Bath and North East Somerset Council a 'highly sanitised version of events in which her role is minimised compared to what is revealed in the Crown Court papers,' Judge Barclay said. She also registered with the General Social Care Council (GSCC) in January 2006 after they believed her version of her role in the crime without checking with the CPS (Crown Prosecution Service).

Barnes was involved in 17 cases in which 31 children were removed from the care of their parents before she resigned in March this year. Yesterday Judge Barclay's report into the case was made public after Barnes failed in a Court of Appeal application to prevent her being identified.

Bath and North East Somerset admitted it was a mistake to employ Barnes but said no children under Barnes' protection had been unfairly removed from their families. The spokesman added: 'Council managers acted to remove Lynda Barnes from duty and address any possible areas of concern as soon as possible.'

Ah, that makes it all OK, then. What is particularly disturbing that, having been shown enormous clemency by the Court, the offending Anglobitch still couldn't control her sociopathic tendencies, presuming the right to lie under oath. And this remorseless Pedestal Princess probably ruined 31 children's lives, into the bargain.